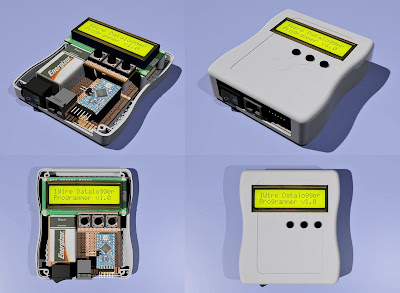 After a long hiatus, I decided it was time to get the 1-Wire iButton Temperature / Humidity data logger programmer off the breadboard and into a usable device! SparkFun's Arduino Pro Mini (now with Atmega 328) is small and powerful enough to move the project to their plastic enclosure case. The Sanguino was just too large for the small hand held device I wanted.

Since space was going to be a premium, I was planning to draw out 2D plan and elevation views at first. SparkFun was kind enough to send me a 3D DXF file of their case. I gave 3D modeling a shot by starting with the Arduino Pro Mini in AutoCAD 2008. I was inspired by several Arduino Google 3D sketch models including this one. The results were good enough that I made the remaining components with the exception of the RJ11 jack model, which I found on a Blender site. AutoCAD is good for precision modeling but a challenge for textures and materials. Still looking for a good solution to covert some of the models into a more portable format to share. So far, exporting to DXF or 3DS has not worked very well...

The SparkFun case is rendered for now in gray for better contrast. I have a semi-clear version, but may end up using black. The 3D model will be updated once the circuit layout is finalized. A slider power switch may have to replace the rocker due to 9V battery spacing, but it stays in for now. The DS1994 iButton real time clock with battery is hidden under the LCD display.

On the software side, the button polling was updated with the debounce library to eliminate the hardware debounce IC. When everything is finished, I will clean up the code and post a new version for the Arduino Pro Mini.
Posted by Jeff Miller at 7:59 PM